This blog is an outlet for sharing some of the more interesting issues that I work on as a consultant to conservation groups and foundations. It includes articles I've written for a public audience, to educate others about these issues in a way that has meaning to them. Enjoy.

For my current website and blog, please go to amymathewsamos.com
Posted by Amy Mathews Amos at 1:29 PM No comments:

Not A Shore Thing

As they say, it’s all relative.   Assateague Island off the coast of Maryland and Virginia remains one of the wildest seashores in the Mid-Atlantic, as I wrote in this month’s issue of The Observer.  The waves pound sandy beaches lined with dunes, not condos, and standing in the right place on a clear day, you can simultaneously admire the crashing surf to the east and the calm marshes to the west.  If you’re lucky, you might even see wild ponies grazing on cordgrass in the distance, with their long tails blowing in the breeze, looking more like wild animals than feral livestock. 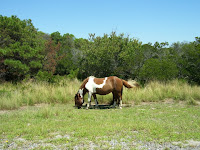 But while the surf may be timeless, the human population is not.  I was reminded of that last week during a brief vacation at Assateague.  Looking out in dismay at the sea of beach umbrellas, I realized that most of my previous visits there had been in the off season – not the height of summer, but the cool of fall or the chill of spring.   My first visit more than 25 years ago was in October, and my then boyfriend (now husband) and I simply slept in the dunes after our midnight arrival from DC.  The human influence had been minimal, and it was easy to pretend that the shore was all ours.
Surely though, even in 2011, one could escape the lazy crowds of summer by walking a ways down the beach with an armful of folding chairs and beach bags, no?  That had always been a tried and true tactic at other National Parks – astonishingly few people venture far from the parking lot.  But at Assateague, where the paved road ends, the drive-on section of the beach begins.  Coming in through the north entrance and walking south away from the beach blanket crowd, you quickly bump into the SUV crowd.   You’d have to dodge fishing lines and tailgates for 15 miles before finding a section of beach free of civilization.  Somehow that didn’t feel so wild.   Even the dunes my husband and I had once slept in are now fenced off to protect them from trampling feet. 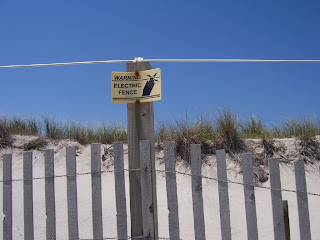 I don’t blame the Maryland or National Park Services or the visitors who seek a seashore experience for any of this.  In this digital age it’s encouraging to see so many people enjoying the outdoors.   Trucks on the beach aren’t my idea of paradise (don’t we get enough of them in our everyday life?), but I recognize that the state and feds are trying to be responsive to a diverse and growing public.
And there’s the rub.  The public is growing.    The global human population is now almost 7 billion and is expected to increase by at least one or two billion more by 2050. Most of the growth in human population has occurred in only the last 200 years:  in 1800 there were only about a billion of us.    Now, UN demographers expect the next billion to be added within 10 to 13 years.   Most of this growth will occur in the developing world, but not all of it.  The US has a fertility rate that ensures continued population growth for at least several decades, adding roughly 100 million more people by 2050.   Globally, this rapid growth will strain natural ecosystems, wildlife populations and by extension, human food and watersupplies. 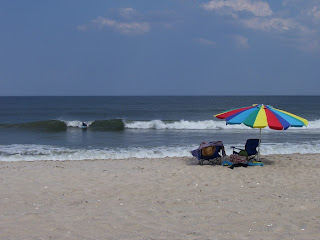 It seems trivial to complain about crowded beaches when billions of people will struggle for existence in coming years on an overburdened planet.  And despite a somewhat frustrating first day at Assateague inhaling stray cigarette smoke, we found a better spot the next day and rode the boogie board to body-surfing heaven. On our final morning, we walked several miles north and finally found the empty beach we craved – empty enough for the park service to remind visitors to keep their clothes on.   It was an odd contrast to the towers of Ocean City emerging like Oz in the hazy distance, but we  had our final swim  in solitude and watched a pod of hunting dolphins slap the surface with their tails to stun what presumably was a tasty school of fish.
And yet, as they say, it's all relative:  the body-surfing was great, but the soul knew what was missing and cried for something more. 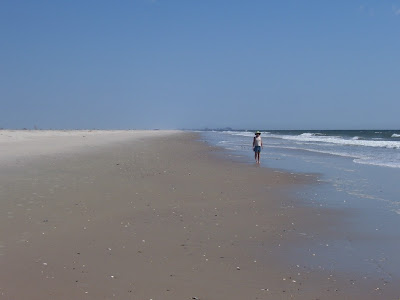 A handoff occurred during my first viewing.  I was mesmerized by the piercing yellow eyes constantly scanning the surroundings, and the fuzzy gray head of a baby bird poking out from underneath the breast feathers.   Suddenly, another eagle entered the frame and landed on the edge of the nest.  The dramatic effect doubled:  now there were two massive birds and bold white heads.    After a few moments, the babysitting parent took off, revealing two more youngsters hidden underneath.  The new arrival shuffled over to assume the position, and the eaglets huddled closer for warmth.
It’s a few days later and I’m back for more, sharing the site with about 80,000 other people also viewing live video feed of the Decorah Eagles  at this moment.  Many of them undoubtedly have visited before – it’s a bit addictive— but with more than 43 million hits since the site went online this winter, the total number of people who have sneaked a peak clearly is quite large.   Sponsored by the Raptor Resource Project  this real-time video feed provides anyone with an internet connection a voyeuristic view of a bald eagle family nesting near a fish hatchery in Decorah, Iowa.    You can also click on links replaying each of the eggs being laid and hatching, as well as the youngsters feeding.
So what’s the big draw?
Read more »
Posted by Amy Mathews Amos at 10:56 AM 1 comment:

It must be the primal, hunter-gatherer part of our brain that makes people so wild (so to speak) this time of year.   Now that it’s April, it’s ramp season in Appalachia, and rural people throughout West Virginia and nearby states will soon be scouring the hillsides, often in large groups, digging up clumps of smelly, leafy bulbs.  Ramps (Allium tricoccum) are wild leeks with tasty leaves and a small, but pungent, bulb, that grow in moist shady areas throughout  Appalachia.  While rural towns celebrate with ramp festivals and fry their ramps with potatoes and ham, urban residents enjoy theirs in fancy restaurants in a lovely salad or pasta with a sprinkle of asiago cheese and perhaps a dry white.  I confess that, although I now live in West Virginia, my location in the relatively cosmopolitan Eastern Panhandle means that I get my ramps the white tablecloth way.  But the thrill is still there:  it’s not just about the taste.  It’s that it’s wild.

Our Time in the Sun

Talk about backfiring.  In our quest for longer, healthier, and more comfortable lives, we’ve removed ourselves so far from our evolutionary history that we’re perversely making ourselves less healthy.
Yes, pollution is an obvious culprit.  We’ve known for decades that toxic chemicals used for modern conveniences can cause cancer, birth defects, and reproductive problems.
But I’m talking about something much simpler:  sunshine.  We don’t get it anymore.  At least not enough of it according to Dr. Michael Holick, a medical doctor and researcher responsible for much of what we know about vitamin D and health.  In his 2010 book The Vitamin D Solution, Holick presents compelling evidence that most Americans have insufficient levels of vitamin D, that this insufficiency contributes substantially to serious health problems such as cancer and heart disease, and that just 15 minutes or so a day of sunlight a few times a week can prevent the onset of health problems in many people. The Centers for Disease Control and Prevention recently released its own report on vitamin D levels (with a lower standard for what's considered acceptable levels), and reported that one-third of Americans have insufficient vitamin D levels.

Amy Mathews Amos
As an independent consultant, I rely on my background in environmental science and public policy and my 25 years experience working on national policies to advise conservation groups and foundations. As a writer, I hope to share some of what I learn with everyone. You can reach me at amy@turnstone1.com, see my profile at LinkedIn.com and my website at amymathewsamos.com